Performance and Politics in the 1970s

Glimpses of Before: 1970s UK Performance Art is a unique and much-needed guide to the ground-breaking yet frequently marginalised practices of artists working in performance art in the UK in the 1970s. Helena Goldwater has compiled and narrated a selection of highly influential artists active in the period, including both iconic and now relatively marginal figures. A profound and compelling artist in her own right, Goldwater is an ideal author of this guide. A student of fine art in the 1980s, she is a direct inheritor, perhaps, of the variously challenging, formally adventurous, or politically nuanced performances of the 1970s. When, over the course of many hours, Goldwater picks individual hairs from a bath of water, and lays them across its lips; or takes into her mouth the drips from ice cubes held in the warming hands of strangers; or manipulates, arranges, holds, and sucks five-metre extensions of acrylic hair – the effects are uncanny, abject, grotesque, sinister, or funny. Entirely her own, Goldwater’s aesthetic nevertheless recalls or inherits the inventiveness of artists narrated in her Study Room Guide, like Stuart Brisley (who mentored her at the Slade in the early 1990s), Anne Bean, Shirley Cameron and Roland Miller, Helen Chadwick, or Rose Finn-Kelcey, and more; each innovated in the use of extended durations, or anomalous uses of pedestrian materials, or induced her or his audiences into acts of imaginative co-creation to complete a performance and enable the proliferation of its meaning. 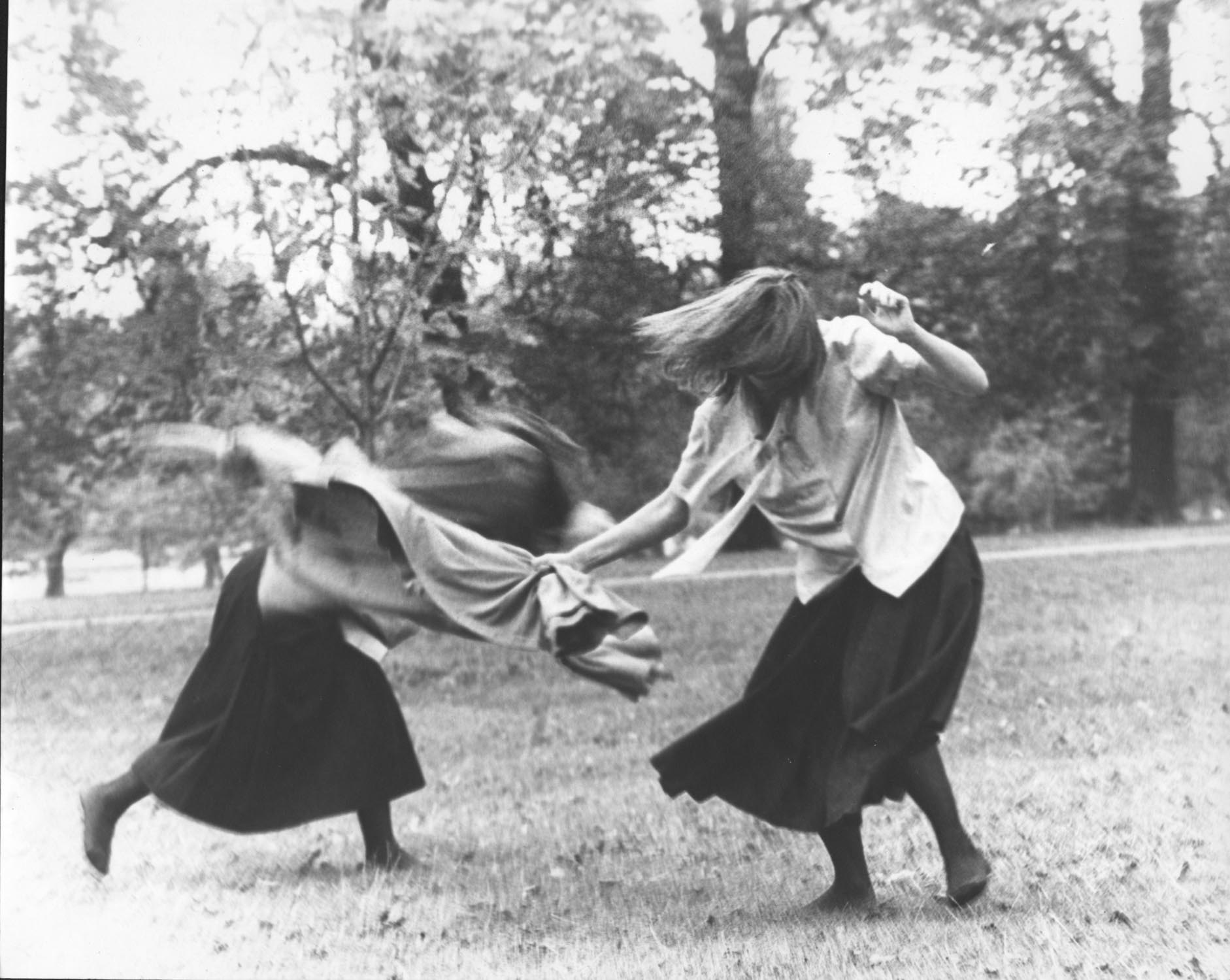 The 1970s is a somewhat maligned decade. A cliché of the decade demeans or dismisses it as culturally superficial and stylistically awful – as typified by glam or disco – the beginning of an age of rampant and facile consumerism, or as a sad hangover of the politically, socially, and culturally vibrant 1960s. Indeed, the novelist and cultural critic Gary Indiana has recently recalled the 1970s in terms of its polarising effect, namely its dissolute thrills, and its tendency towards fiasco:

Can you even remember the urgency we felt in the ’60s, reading Norman O. Brown and [Herbert] Marcuse – or even Buckminster Fuller – to move human society in the direction of life against death? It was all on the verge of really happening, the so-called transvaluation of all values, apocalyptic changes in the social order, a polymorphically perverse, orgasmic version of the Rapture – [until] violence pulled it totally down the toilet.

Indiana is referring to the perceived death of the culture of possibility signalled by the 1960s, which is often recorded as having been killed off by the shame or horror of, say: the assassinations of Martin Luther King, Jr. and Bobby Kennedy in 1968; the massacres in California committed by Charles Manson and his hippie ‘family,’ in 1969, and their highly mediatised trials and sentencing in 1971; and the death of seven people at Altamont Free Concert in 1969, including the killing of a fan by Hells Angels at a Rolling Stones gig. Yet eras and spirits rarely have such beginnings and ends as neatly periodised as calendar decades. Moreover, these flashpoint events are all North American occurrences; as horrible and spirit-rending as they were, their suggestion of global cataclysm signals the power of America’s cultural imperialism, whereby its mythic occurrences lay claim to their own apparent power to create or destroy universal narratives of culture, epistemology, or ontology.

Popular American culture and the political imagination it sustained may have been ‘pulled down the toilet’ in 1968-69, as in Indiana’s provocative characterisation, but closer to home, in the UK, the 1970s saw the radicalisation of working-class revolt, as signalled by industrial strikes by the National Union of Mineworkers in 1972 and 1974, and a proliferation of other strikes by different industries, which brought about the Three Day Week of 1974 and felled Edward Heath’s Conservative Government in the same year. Culturally, if the 1970s were a highpoint of British music and television, it also bore the crystallisation and maturation of performance art as a cultural form in the UK. Glimpses of Before documents the fruits of this process of discovery, ambition, and innovation. By the end of the decade, performance art was recognised more fully as a series of practices that could be programmed, sometimes funded, and smartly written about – as testified to in some ways, perhaps, by the founding of Performance Magazine (a highly influential periodical) in 1979.

Goldwater’s Study Room Guide offers a history of performance and politics in the 1970s. It was commissioned alongside a one-day symposium at Whitechapel Gallery in May 2015. The event, Performance and Politics in the 1970s was co-organised by Nicholas Ridout and myself (both scholars of performance in the Department of Drama at Queen Mary University of London), in collaboration with four landmark organisations in the East End of London, namely Live Art Development Agency, Acme Studios, Matt’s Gallery, and Whitechapel Gallery. Funding from the Humanities and Social Sciences Collaboration Fund at Queen Mary University of London enabled the public event, and two month-long residencies by Anne Bean (at Whitechapel) and Marcia Farquhar (at Acme). It also enabled the production of this Study Guide. The project aimed to reflect upon the methods and practices by which a history of a decade of performance art might be attempted. Performance and Politics in the 1970s was a project concerned, therefore, with content (the ephemeral acts and documented traces of specific acts of performance art), as well as with method (the tactics, strategies, and techniques with which an artist, scholar, student or other audience might seek to know or lay claim to such histories).

In the event at Whitechapel, we heard presentations by artists, scholars, curators and critics. Each provoked insights into what a history of the 1970s might include, and the political implications of how such a history may be found, spoken, or written. One of the speakers, the historiographer Carolyn Steedman, writes elsewhere that ‘[t]he object (the event, the happening, the story from the past) has been altered by the very search for it, by its time and duration: what has actually been lost can never be found’. That is, the shape of any history is fashioned by identification, privilege, and selectivity, and thus by oversights, exclusions, and other acts of discernment, desire, and/or bias. The present Study Guide sustains this inevitable partiality. Similarlu, the public event’s proceedings would not be fully exempt from these effects, but we sought to reflect on the practices and consequences of history, as they pertain to performance and politics in the 1970s. In presentations by Anne Bean, Marcia Farquhar, Naseem Khan, Carolyn Steedman, William Raban, Rob La Frenais, Heike Roms, David Gale, and Hilary Westlake, we saw how our search might alter and engender the archive of lost objects that collectively we seek.

Dominic Johnson is a Senior Lecturer in the School of English and Drama, at Queen Mary, University of London, and serves on the Board of Directors of the Live Art Development Agency. He is the author of Glorious Catastrophe: Jack Smith, Performance and Visual Culture (2012); Theatre & the Visual (2012); and most recently, The Art of Living: An Oral History of Performance Art (2015); and the editor of five books, including most recently (with Deirdre Heddon), It’s All Allowed: The Performances of Adrian Howells, co-published by the Live Art Development Agency (2016)